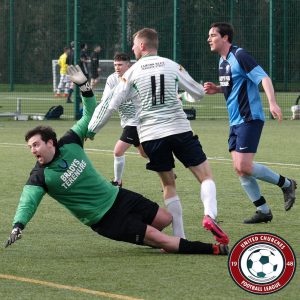 VEC FC 2nds got off to a flying start when Paddy Cook shot us into the lead inside five minutes, then Jamie Ryder blasted home a free kick on 10 minutes to double our advantage against Fairview Celtic on the Clontarf Astro in Division 2A.
But that’s as good as it got for VEC FC as the home side knuckled down and were back on level terms on 30 minutes when they were awarded a penalty that Declan Fitzsimons, who bagged himself a hat-trick, slotted home, as Fairview went on to win 5-2.
John Mooney’s photo shows VEC keeper Colin Power watching this shot go wide. 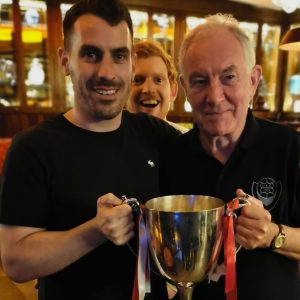 VEC FC have been drawn to play Beech Park FC in the Challenge Cup last-16 on Saturday, 5th March in St. Catherine’s Park in Lucan.

In the Richard Knight Cup, VEC FC have been drawn at home in the last-16 against the  Harding IF who knocked Dunshaughlin Youths out on penalties.

In the MMI Cup, VEC FC 2nds have been drawn at home in the last-16 to Dynamo Ridgewood 2nds. 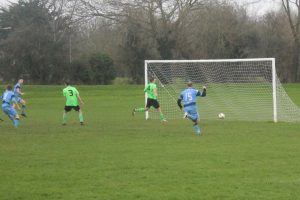 Just like the buses, when you’ve waited so long to score, and then score two weeks in a row! This is Gav Murphy scoring a last-gasp goal for VEC in the 89th minute to ensure a 2-2 draw against Ashwood FC in Corkagh Park.  The home team found themselves two goals ahead after 57 minutes, when VEC eventually came to life and Ray Jaudzems pulled one back 10 minutes later. Thereafter we poured pressure on Ashwood resulting in Gav’s equaliser and another few good chances but no further goals in this Premier Division match played in dreadful weather conditions. More pics. here. 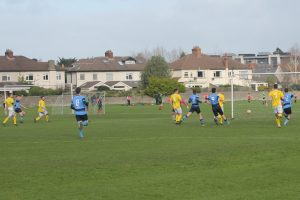 It’s nearly 4 years since Gav Murphy (left in pic.) scored for VEC and that was against today’s opposition Glasnaion FC. But that was rectified today in the 30th minute of the Premier Division match in Terenure, when this strike hit the back of the net to put VEC 2-0 ahead. Joey Byrne had opened the scoring 10 minutes earlier and then Seamus Staunton made it 3-0 just before half time. Further goals from Joey and Seamus in the second half and a deflected James McGauran goal straight from a corner gave VEC a resounding 6-1 win.

Meanwhile, goals from VEC’s leading goalscorer Colm McSharry, Paddy Cook and Fionn Riordan ensured that VEC 2nds took all three points in their 3-1 win in Division 2A, away to Latin Dubs FC. 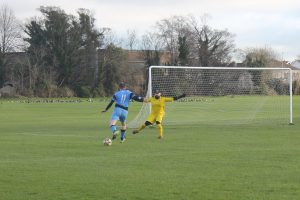 Even the geese migrating from Canada or Greenland (or wherever) thought that Pat Meghen would score here: however, his effort hit the bar, but the ever alert Seamus Staunton followed up and hit the back of the net to put VEC 1-0 up after just 3 minutes in this Premier Division match in Terenure.

In the 58th minute, Lourdes Celtic pulled one back, but 14 minutes later, Tom Wrynne put VEC back in the lead and that man Seamus put the icing on the cake after 90+3 minutes with his second goal to make it 3-1. 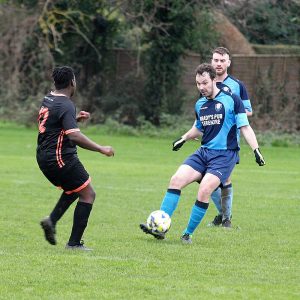 As reported on the United Churches Football League Facebook page, “South Dublin FC raced into a 2-0 lead inside the opening 20 minutes of this Division 2A clash, but VEC got back into the game on 30 minutes, as Conor Daly fired home a loose ball from inside the area. It put a pep in VEC’s step and as the half drew to a close they netted an equaliser when Colm McSharry guided home to make it 2-2”.

“Early in the second half Colm scored his second, when he put away a Gildas Oliver centre after he had nutmegged a defender in the process. It put VEC well on the front foot and it wasn’t long before number four arrived when Brian O’Sullivan raced down the right hand side, evaded a sliding tackle and crossed for Eoin Sweeney to slot home”. 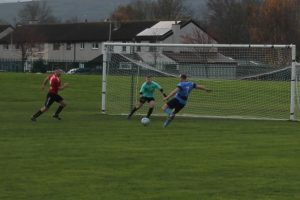 Ray Juadzems scoring VEC’s equalizer against Tallaght Utd. in the 26th minute of this top of the table clash in Tallaght. The home team had opened the scoring with a 40 yard free that sailed into the net. Then in the 44th minute, a Seamus Staunton penalty restored VEC’s lead, only for the opposition to equalize on the stroke of half-time, making it 2-2.

There were no further goals in the second half and both teams shared the spoils as the race for the Premier Division title continues. 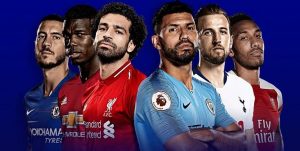 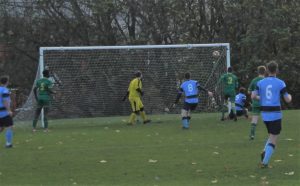 This was Jay Hester’s (9) 85th minute goal that cancelled our Lourdes Celtic’s 67th minute freak – but extraordinary – goal to gain VEC a share of the points in their Premier Division clash in Sundrive Park.

VEC had plenty of chances to win the match and make it 8 league wins out of 8, but alas, it was not to be and it finished 1-1. Some chances here.