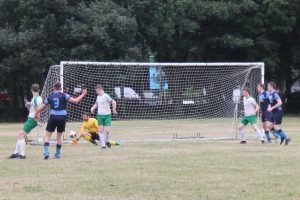 Gav Murphy (3) scores the only goal of the game in the 3rd minute against Harding IF FC on a dreadful pitch in Ringsend Park on Wednesday evening, as VEC ran out 1-0 winners in the David Blood Memorial Tournament.

VEC now have 6 points from the first two games. 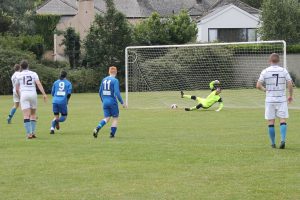 Pat Meghen scores VEC’s 7th goal from the penalty spot against Rialto FC in the first match of the Pre-Season Tournament. With the visitors battling hard in the first half, it was only 1-0 at half time after Tom Wrynne had opened the scoring in the 15th minute. However, in a fifteen minute spell soon into the second half, VEC hit the net on five occasions through Joey Byrne, Jay Hester (twice), Antoine Daubigny and Jordan Howard, with Rialto pulling one back, before Pat’s penalty in the 75th minute, making it 7-1 to the home team.