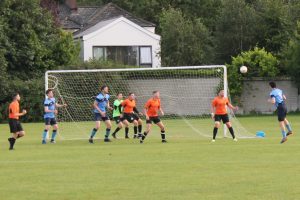 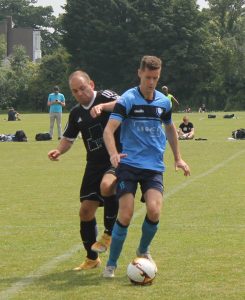 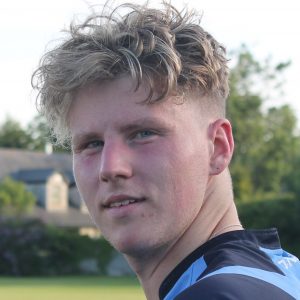 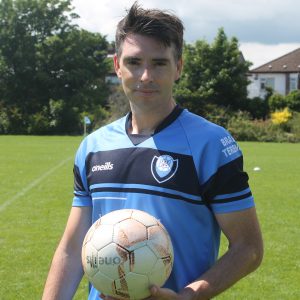 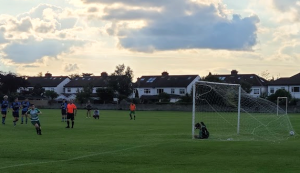 A spirited performance from VEC in Terenure on Wednesday wasn’t enough as we failed to score despite plenty of possession. But at least there were signs of improvement as the 17 players in the squad begin to gel together. The only goal in the game came from the penalty spot (click on pic.) early in the 2nd half to give Clondalkin Celtic all three points in this pre-season tournament. We move on! 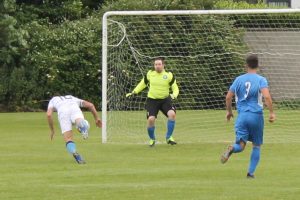 It took Aidan Hyland just 24 minutes on his return to action after a serious injury to get on the scoresheet for VEC, with a delightful diving header against Aston Village in Terenure on Saturday. Click on image.

With the lock-down also delaying his return, it was great to see him back in VEC for his first game since May 2019. Also good to see Neal Breslin and Tom Wrynne return to the fold as VEC ran out 5-3 winners in this UCFL Pre-Season Tournament. The other scorers were Jack Nolan (again), Tom Wrynne, Ray Jaudzems and Seamus Staunton. 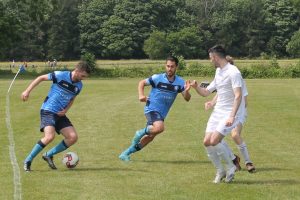 With just one previous goal for VEC back in January 2019, Jack Nolan scored two spectacular goals in the 18th and 78th minutes, helping us on our way to a comprehensive 6-0 win away to Atletico Malahide. Oisin Kinsella had opened the scoring in the 12th minute, with captain Seamus Staunton netting a penalty in the 22nd minute, followed one minute later by a Ryan Brady strike on his debut! Then Jeff de Castro in the 83rd minute, with his first for VEC, curled a beautiful effort into the top right corner to make it 6. Click on pic. to enlarge 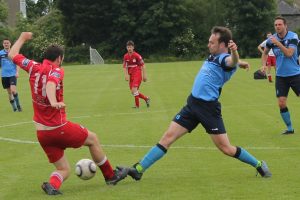 While it wasn’t the result we would have liked, it was great to be back playing football again last Saturday, after a gap of 10 months.

Even though we conceded an opportunist goal to Shelbourne AFC 10 minutes into the 2nd half, it seemed only to be a matter of time before we would score, based on our possession, but alas that goal never came despite some good chances. The visitors then scored their second in the dying minutes to take all three points in this UCFL Pre-Season Tournament. We move on! 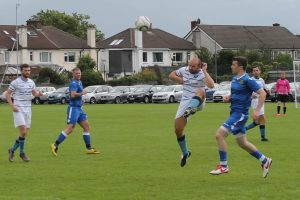 Another penalty shoot-out was needed to decide the winner as the sides finished level at 2-2 after 90 minutes in the Premier Division Shield Final in Terenure.

VEC had to come from behind on two occasions: Coolock Village opened the scoring in the 40th minute only for Seamus Staunton to equalise from the penalty spot just three minutes later. Then three minutes into the second half they regained their lead until the 64th minute when Ray Jaudzems (in pic.)  made it 2-2. 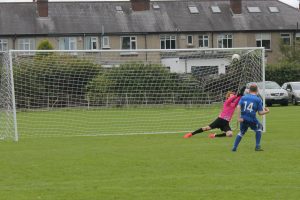 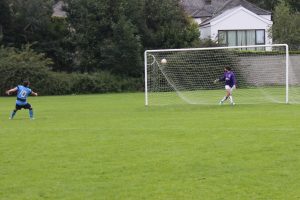 Coming from 2 goals down after 20 minutes, VEC drew level after 38 minutes in the Premier Division Shield Semi-Final in Terenure. But the visitors restored their 2 goal advantage by the 10th minute of the second half, only for substitute Andy Myler to roll back the years with an exquisite 80th minute free kick and then captain Seamus Staunton to equalise from the penalty spot with virtually the last kick of this hectic game to bring this tie to penalties. We now meet Coolock Village in the Shield Final.