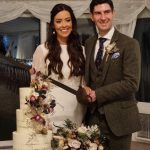 Joey Byrne with his beautiful bride Cara on their wedding day last Saturday. Congratulations to you both from all at VEC FC.

Having joined the club in 2004, VEC stalwart Joey has since played over 400 games for VEC FC and in October 2017 surpassed Noel Ryan’s long standing Club goal-scoring record of 198 , and currently sits atop of the Club’s all-time leader board with 243 goals. 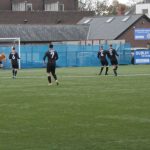 This was a great goal from Aidan Hyland after just 10 minutes against Fairview Celtic in the Challenge Cup match in the Dublin Port Stadium on Saturday. However, shortly after half-time VEC lost centre-back Neal Breslin for a ‘last man’ tackle, compounded by the home team equalizing, and then going ahead in the 78th minute. Their lead was short-lived, as Aidan scored his second goal a minute later and brought the game to extra-time. Joey Byrne then scored for VEC before Fairview equalized once again, bringing the game to a penalty shoot-out, where we missed one, and they scored their 5, knocking us out of the Cup!

It was not a good day for VEC, as our 2nds were knocked out of the MMI Cup by Stedfast Utd.

It is with deep regret that we announce that former club member, mentor and friend Robbie Ebbs sadly passed away this week. He was such a colourful guy and always good company. He was inspirational and brought the best out in everyone, no more so than when he impressively managed VEC teams for five seasons in the 90’s.

VEC Football Club extends sincere condolences to his wife Anne and to his family and friends on their sad loss. May he rest in peace. Read his VEC ‘Bio’ 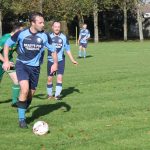 With the VEC grounds declared unplayable, this Division 2 game was switched to  Stannaway Park, where Gildas Oliver (seen here) scored the opening goal in the 37th minute. Lourdes Celtic equalized just 5 minutes into the 2nd half, although whether the ball actually crossed the goal-line after re-bounding off the post, is debatable! In any event, the introduction of Frankie Nolan and Liam Marshall on the hour mark, resulted in the former crossing for the latter to score a deserved winning goal for VEC FC 2nds in the 80th minute. More pics. here