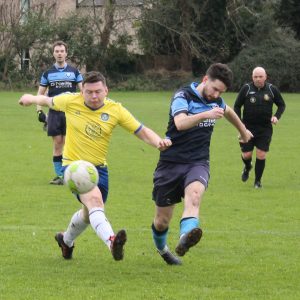 In the Division 2 top-of-the-table clash in Terenure, Sandford St. Mary’s maintained their 5-point lead over second-placed VEC 2nds after the game finished 0-0.

Garry Curran (pic.) had one of VEC’s best chances but unfortunately this effort flew just over the crossbar!

Meanwhile in the Premier Division, three VEC errors in the 40th, 42nd and 45th minutes led to three goals for Oldbury to add to their 28th minute strike from a set piece and gave them a commanding 4-0 lead at half time on Sacred Heart’s all-weather pitch in Killinarden. Joey Byrne’s goal in the 67th minute was VEC’s only consolation on the day! 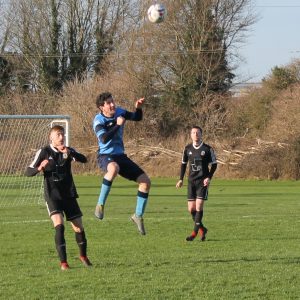 Glasnaion FC proved a ‘tough nut to crack’ until Joey Byrne broke through and dinked the keeper in the 70th minute to score the only goal of the game.  It could have been more as we had a penalty re-take brilliantly saved by the home keeper in the 27th minute (pics. below).

Once in the lead, we just shut up shop to make sure of the points. Glasnaion were a threat on the break across the 90 minutes, but we secured the 3 points thanks mainly to an excellent defensive performance.

Unfortunately VEC are not in the 6th round draw this season, having reached the 7th round (last 16) last season [for the 2nd time in three years].

There we lost 1-3 to Kilkenny outfit Evergreen FC on 3rd February 2019. 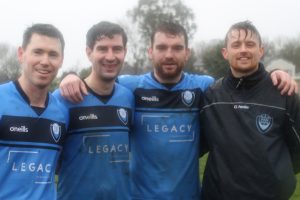 He set VEC on the way as early as the 6th minute with a great strike, only for the visitors to score from the penalty spot 10 minutes later. However, goals from Oisin Kinsella and Jordan Howard gave VEC a commanding 3-1 lead at the break.

Oisin’s second strike 2 minutes into the second half after some magic play from Joey effectively wrapped up matters as VEC raced into a 4-1 lead. Then Tom Wrynne with two goals in 3 minutes put the icing on the cake for VEC despite a 2nd goal from South William St. 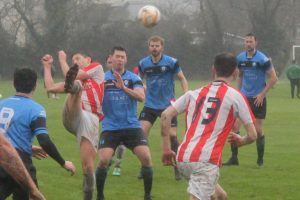 Meanwhile in Division 2, a late Karl Reck strike gave VEC 2nds a deserved share of the spoils against Booterstown Utd. in a game that finished 2-2. Andy Stansell – with his first for VEC – scored VEC’s first goal. 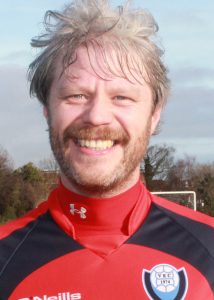 2 goals a-piece from Eoin Sweeney and Neil Murtagh, and a further one from Richie Burke secured all 3 points for VEC FC 2nds against Swords Manor in the 5-2 win in Terenure.

Unfortunately VEC 1sts couldn’t make it a double for the Club, going down 1-2 to Beech Park FC in the Premier Division. James McGauran scored VEC’s only goal.