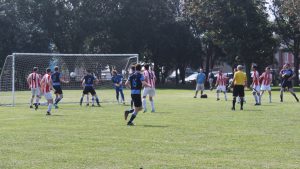 Unfortunately it was not to be! In this strange ‘Covid’ season, VEC failed to score (for the first time in a league game) and had to relinquish our Premier Division title to South William Street Celtic.

This fine header from VEC’s Conall O’Shaughnessy [click on image to enlarge] seemed to be destined to hit the back of the net early in the second half and cancel out South William Street Celtic’s 18th minute ‘cracker’ in the top-of-the-table clash in Ringsend Park. Alas, it was cleared off the line and despite some later efforts – including a rasping shot from Seamus Staunton which re-bounded off the crossbar – and with VEC pushing for the critical equaliser, the home team wrapped up the game with their second goal in the 85th minute to win their first and a well-deserved Premier Division title.