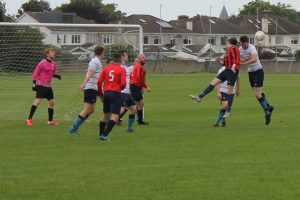 In his first competitive game since March, Richie Hannify’s ‘wonder’ save in the 90th minute ensured that VEC gained all 3 points against Castle Celtic in Terenure to move to within three points (with a game in hand) of Premier Division leaders South William Street Celtic.

Pat Meghen – with another priceless goal – had opened the scoring in the 10th minute and VEC should really have put the game out of the visitor’s reach in the first half, but failed to convert a number of chances. This gave Castle hope as they pushed for the equaliser late in the game, but solid defending and that save kept VEC on course to retain the league title.