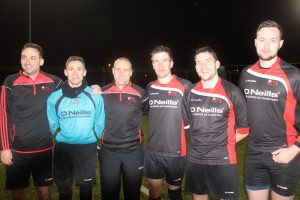 Pictured after the match in Kildare on a cold night in December are Mick Kinsella, Davy Frewen, Peter O’Brien, Seamus Staunton, Gav Murphy and Conall O’Shaughnessy who all represented the UCFL in this season’s Oscar Traynor Trophy. Ray Jaudzems also played earlier in the competition and once again a VEC FC player was granted the honour of captaining the team … this time it was Gav Murphy.