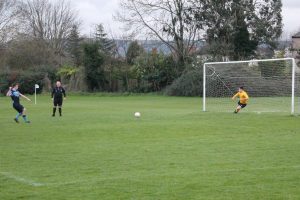 VEC suffered the first loss in 14 Premier Division games in the first mid-week fixture of the season.

The visitors Harding IF FC scored the opener just 2 minutes before half-time, and then added a second 15 minutes into the 2nd half, giving VEC a mountain to climb.

However, just 3 minutes later, a Seamus Staunton penalty (see pic.) made it 1-2, and despite a late bombardment on the Harding goal, there were no further goals. More pics.