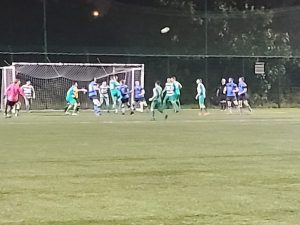 Conall O’Shaughnessy about to head in VEC’s last gasp equalizer at the end of extra time which brought our FAI Junior Cup game against Leinster Senior League outfit Booth Road Celtic to a dreaded penalty shoot-out on the SDFL’s Astro.

VEC had opened the scoring with Neill Love’s first goal for VEC in just the 2nd minute and an exquisite second followed from Jordan Howard in the 27th minute before the home team pulled one back in stoppage time in the first half. They then levelled the game 6 minutes into the second half and it remained 2-2 after 90 minutes.

Extra time followed and Booth Road took a fortuitous lead in the first period when the ball was deflected by a VEC defender into his own goal. But the equalizer brought it to 3-3 and penalties where VEC unfortunately missed two, resulting in the home team advancing on a 4-1 shoot-out score.