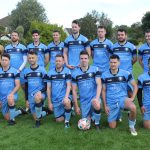 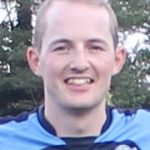 A hat-trick from striker Paddy Cook helped VEC to a good 4-3 win, before he was forced off through injury. Ronan Murphy added the 4th. 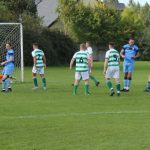 Mick Kinsella turns away after scoring VEC’s second goal 2 minutes after the break. Thereafter, VEC were in full control scoring 3 further goals in the 68th, 75th & 87th minutes, with the visitors scoring in the 78th minute. Tom Wrynne had shocked the opposition with VEC’s first goal after just 30 seconds! 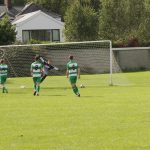 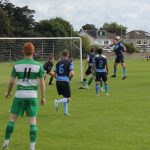 his own goal from a Brian O’Reilly cross brought VEC level in the 40th minute after Trim Celtic had opened the scoring with a spectacular volley 10 minutes earlier: https://fb.watch/fE8hVeMJ-S/

With only 10 minutes remaining, the visitors went ahead against the run of play, it has to be said – also through an o.g. – and then scored a third –  in the 87th minute to advance to the next round.